This is the poster of mine that caused all the fuss, the one that’s in the permanent collection of  The Smithsonian Institution’s National Portrait Gallery. I’m very proud of it. 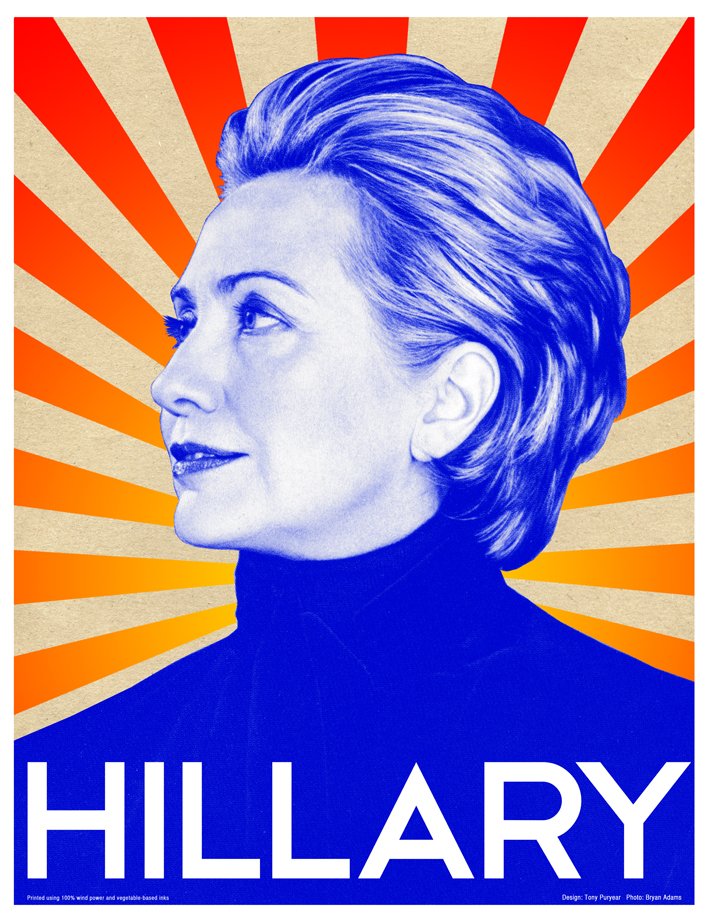 Starting with the best design client I ever had, the then-Senator from New York, Hillary Rodham Clinton, this was a lucky project from the beginning. What designer wouldn’t want a one-named celebrity to make a poster for? Madonna, Elvis, Hillary. That was a piece of luck right there.

My wife, Erika Alexander, was Hillary’s National Surrogate in her 2008 presidential campaign. She spoke all over the country on the candidate’s behalf. Erika saw a need for a poster for the campaign, something colorful and impactful. Erika envisioned something with rays of light.

Rock singer Bryan Adams (“Have You Ever Really Loved A Woman”) permitted me to use his beautiful photograph from his book American Women, proceeds of which went to Memorial Sloan–Kettering Cancer Center in New York City for their breast cancer research, a cause dear to then-Senator Clinton.

We found a tremendous printer in the DC area, Harris Litho,  who a) worked union, b) used 100% wind power and c) used vegetable-based inks. All of these things were important to the Senator.

We produced the poster, the client was thrilled and the campaign began disseminating them. It was a great time for campaign posters, as Shepard Fairey’s “Hope” and “Change” posters for Barack Obama had just hit the streets.

Then the controversy started. Critics and bloggers claimed the sun-ray motif of this poster were reminiscent of Mao-era Chinese propaganda posters. Some further claimed this was evidence of some sinister agenda on the candidate’s part. For the record, these glowing rays and this iconic imagery were meant to evoke a certain, uniquely American “heartland” feeling. For me the image evoked peach crates and apple crates of the 30s and 40s, bright and full of promise.

In the end, though the Senator didn’t win her party’s nomination (that time around), the poster found a home appropriate for its Americana vibe. In 2011, it was added to the permanent collection of The Smithsonian Institution’s National Portrait Gallery, where it lives alongside other iconic images by Gilbert Stuart and Matthew Brady. A lucky project, indeed.